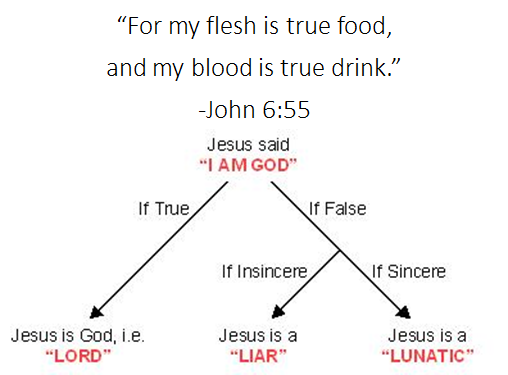 “Christ either deceived mankind by conscious fraud, or He was Himself deluded and self-deceived, or He was Divine. There is no getting out of this trilemma. It is inexorable.”
-Mark Hopkins, Lectures on the Evidences of Christianity, 1844

This threefold choice of Jesus’ divinity, later advanced in the writings of CS Lewis (and, more recently for the podcast viewing public, Fr. Mike Schmitz), says we must choose whether Jesus is a liar, lunatic, or Lord. Because he lays claim to being the Son of God, and because he asserts authority to forgive sins, and because he offers himself as “true food,” he cannot simply be a good teacher, a kind and loving religious leader, or an ecclesial role model.

In this Sunday’s Gospel passage from John, Jesus says “I am the Bread of Life,” which seemed an acceptable enough analogy after thousands of Jews were fed with a few barley loaves. But Jesus becomes more pointed, saying “the bread that I will give is my flesh for the life of the world … my flesh is true food, and my blood is true drink.”

Wait … what? Jesus crosses the line from a happy metaphor about bread and delves into a bit of … lunacy, right? I mean, it sounds a bit like cannibalism. Did he mean what he said?

Apparently, he did. “As a result of this [teaching], many of his disciples returned to their former way of life and no longer accompanied him.” (John 6:66) And when the disciples left, there is no scriptural reference to Jesus calling everyone back, saying “hold on, hold on. What I meant to say was …” And that is why I, as a Catholic view the Eucharist not only as a symbol or an analogy, but as Jesus’ true food containing the body, blood, soul and divinity of Christ.

As a believer, I would be both a lunatic and a liar to go back to my former way of life. Jesus is Lord and I want to live as he taught because I crave the living bread he offers me. I choose to accompany him on this earth so that I can be in full communion with him in glory. Join with me. “Glorify the Lord with me, let us together extol his name.”

Jesus, I know and believe you are the Christ, my Lord and savior. I accept the bread you offer and will drink of the cup so that I can be with you in paradise. In thanksgiving for your mercy on me, a sinner, I will forever sing your praise. Amen

Graced With Beauty For Ashes

a place to grow your faith in Jesus...

A Biblical Worldview. Jesus is the WAY, the TRUTH and the LIFE

The daily life of an addict in recovery

“God’s wisdom is something mysterious that goes deep into the interior of his purposes.” ~Apostle Paul

Voices of the Past for the Christians of Today

Mercy for the Day

A reminder that God's mercies are new every day

The Domain for Truth
The Writings of A. K. Frailey

Books for the Mind and Spirit

Kitty in the City
Julie Dibble, Speaker and Author